Charlie Fink Writes About VR Training Next Generation of Workers

Charlie Fink is a former Disney, AOL and American Greetings executive. In the 90s, he ran VR pioneer Virtual World. Today he is a consultant, professional speaker, columnist for Forbes and author of Charlie Fink's Metaverse, An AR Enabled Guide to VR and AR.

By the time I spotted the shotgun, it was too late. I feel a sting in my thigh. I’ve been hit. I was distracted by the hysterical wife, while my partner was dealing with a nosy neighbor. We get off thirteen shots, all high, merely grazing the assailant. The simulation comes to a stop. “Rookie mistakes,” says our trainer, Deputy Jose Diaz of the LA County Sherriff’s Department. The LASD is a 17,000 man force that polices the endless suburban sprawl outside LA’s city limits. 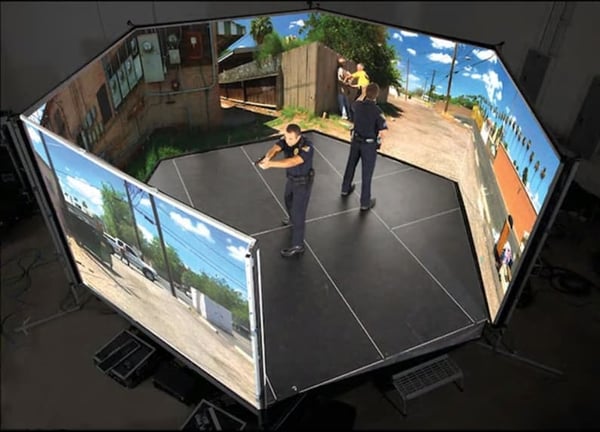 The shotgun was on the shelf behind the subject the whole time. We missed it. At the controls of the simulator, made by Virtra, James Grady, who operated the branching 360 narratives in real time, smiles. It could have gone another way. The subject could have complied. “What fun would that be?” He asks. The simulator is for advanced officer training. “This is much more realistic than range training,” which is also possible with the system. “It gets the heart rate up.” Scripted live simulations with actors are the traditional way to accomplish this, but it’s difficult and expensive. Debriefings are limited to after-action analysis. With Virtra, the action can be stopped and replayed. Grady explained that “during our live training deputies’ heart rates go through the roof, but it’s so expensive we can only afford to do it once a year. This isn’t as intense, but we can still get you going pretty good in here, too.”

The VirTra system consists of a five-screen sided, 300-degree screen, like a wrap- around CAVE. Trackers follow the participants. The floor is wired for sound and vibration. For security training, VR without a head-mounted display is much more realistic, because that’s the way it is in real life. Real weapons, modified with lasers, and supplemental equipment like TASERS and mace can also be deployed within the simulation. The deputy is equipped with the exact same equipment they have on patrol, allowing them to make use of force choices they’ll have to explain later. The system plays branching live-action 360 videos, which an operator chooses based on the responses of those in the simulation. VirTra provides most of the content, but the LASD also worked with the company to create custom content. I asked Deputy Diaz why the subjects in all the videos seem drunk. “Because most of them are,” he said matter-of-factly. More frightening still are those with guns who are not drunk. The “School Mayhem” scenario is terrifying, realistic and memorable. 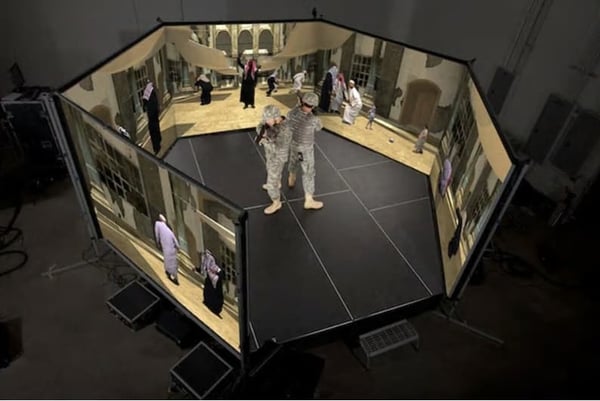 VirTra (publicly traded: VTSI), founded 1993 and based in Tempe, AZ, expects to list on Nasdaq later this year. “Those entrusted with lethal force decisions should be provided training equal to the importance of the decisions they must make,” said Founder and CEO Bob Ferris. VirTra’s web site says its products provide “Judgmental Use of Force Situational &amp; Scenario Awareness, Critical Thinking, Communication Skills, Decision-Making Under Stress, Reading Body Language, and Threat Cues, Use of De-Escalation Techniques, and Public and Officer Safety”. VirTra is not a household name, but within police circles, VirTra is known for realism. Their systems are used by top security forces around the world, including the US, Mexico, Brazil, and Australia. 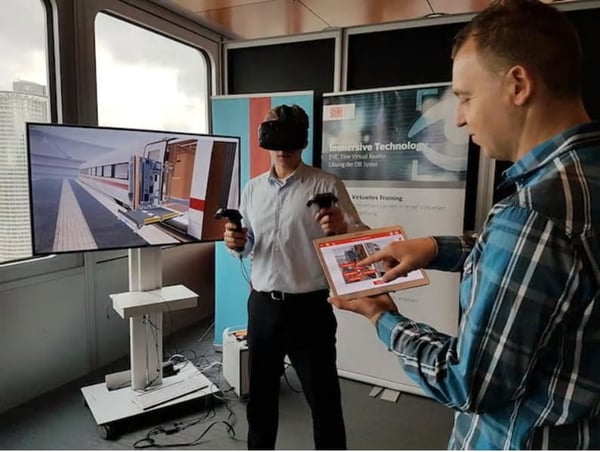 Siemens, the German technology giant, supplies much of the equipment for Deutsche Bahn, Germany’s national intercity express train system. With over 4,000 employees working with new technology, the company is increasingly relying on Virtual Reality simulation for training. “VR is a great, economical way to provide hands-on training that is almost impossible to replicate in the real world,” said Martin Repondek of Deutschbahn. The company uses the HTC Vive to create custom VR training scenarios, perfectly replicating Deutsche Bahn’s equipment, tools, and controls. “It is particularly good for big, physical simulations of new equipment and operations,” Respondek told me. According to Usman Ghias, head of virtual product training for Deuschbahn, by the end of 2018, the entire workforce of 4,000 will train in virtual reality.

STRIVR grew out of a Stanford University master’s thesis by Founder and CEO Derek Belch. At the time, Belch was a member of the nationally ranked football team’s coaching staff. The STRIVR system captures 360 videos from behind the quarterback. This video can later be used to practice reading defenses. There are rules about the amount of field time college and NFL quarterback can spend in live practice drills, so STRIVR provides the realistic repetitions quarterbacks need without risk. This is another example of VR doing something which is extremely difficult to simulate in real life. The STRIVR system is particularly good for quarterback simulations because of those critical decision making moments a passer in the pocket.

Carson Palmer, the quarterback for the Arizona Cardinals NFL team, has an Oculus Rift system installed in his home. “I don’t use technology or try to stay away from technology, but the STRIVR system is not something I could stay away from,” Palmer told ESPN. “It’s another way of watching film. The same time I spend watching film, I spend on the STRIVR. I spend almost as much time on the STRIVR as I do just on the playbook, going through different reads and progression, so it’s a huge part of what I do.” Palmer was a powerful early VR success story and got a lot of press for this new way of training while leading his team to the division championship in 2015.

Brock McKeel, Senior Director of Operations for Wal-Mart was exposed to STRIVR when he saw the Arkansas Razorbacks college football team using its system. The companies soon forged a long-term relationship to use VR to aid the training of Wal-Mart Managers and specialists. Wal-Mart’s 360 video was shot in actual stores and allows employees to experience black Friday and see how the crowd on the floor is managed. Managers can virtually be placed behind the deli counter, where they can evaluate the environment and the performance of employees. While only one person in the class can don the Rift headset, the other employees benefit from seeing what they see on a monitor. McKeel told me the company measures success by the responses of the students and instructors. “The trainers see improved engagement, and student assessments after the classes rate the virtual reality training very highly. It’s one of the most memorable aspects of their training.” 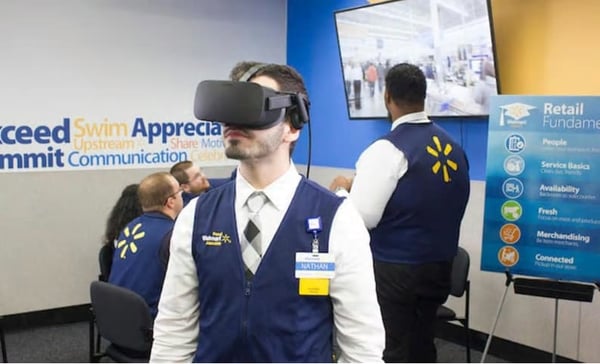 Wal-Mart has added VR to the curriculum at its Training Academies. Photo credit: Wal-Mart

Wal-Mart has 170 Training Academies in its system, approximately one for every twenty-five stores. Andy Trainor, Wal-Mart’s Senior Director in charge of the Academies, said Wal-Mart’s training team “gave a lot of thought to creating scenarios, like Black Friday, that needs to be experienced live.” In general, the company tries to make its trainees invisible to customers. “We wanted to find a way to train without disrupting operations.”

Building on the success of its work with Wal-Mart, STRIVR is now working with United Rentals, Fidelity, a major auto-manufacturer, a nursing development organization, and more. 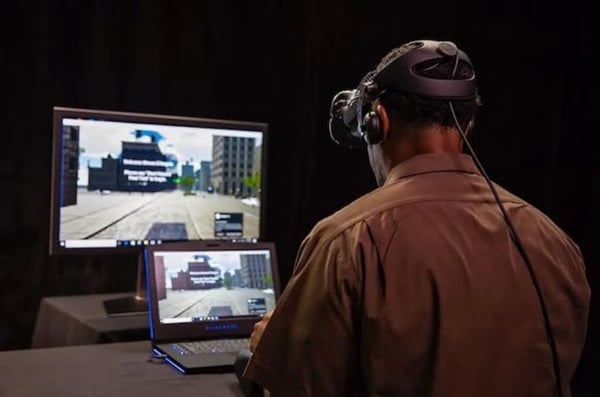 Students using the modules must verbally identify potential road hazards such as pedestrians, parked cars, and oncoming traffic. The 360-degree view inside the Vive headset is extremely realistic. “Virtual Reality offers a big technological leap in the realm of driver safety training,” said Juan Perez, Chief Information and Engineering Officer for UPS. “VR creates a hyper-realistic streetscape that will dazzle even the youngest of our drivers whose previous exposure to the technology was through video games.” The company says it is exploring VR and even Augmented Reality (AR) for training tractor-trailer drivers and others throughout the operation.

The explosion in VR training is driven by its unique ability to replicate a place and a situation that would be difficult in not impossible to do in real life. Virtual reality training makes the kind of deep impression classroom training on 2D monitors does not. KFC has added gamification, Col. Sanders, and VR simulation of cooking their famous chicken recipe to their training.

Just in time for Halloween, the KFC VR experience terrifies and entertains while teaching, a novel approach to serious business. This video comes directly from the Department of WTF. At first, I thought I’d clicked on the wrong thing, or that someone was pulling a Halloween prank. But no. This is the real thing. No doubt the hapless workers and teenagers who endure this VR training experience will never forget it. It’s possible you won’t either.

We’d like to thank Charlie Fink for being a guest author on our blog! Check out some more of work here - and if you’re ready to start learning about virtual reality, start small and take our 5-day email course. Here you'll learn the fundamentals of virtual reality for business in 5 short sessions. Or, if you're ready to move onto the real deal - sign up for a free Yulio account here!

This post was originally featured on Forbes.com on October 30, 2017 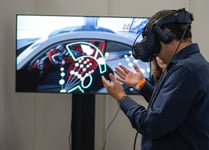 VR Training could be the future of your industry

The Future of Skills Development: VR Training for Enterprise