The past couple decades welcomed a new cohort that is drastically different from their predecessors -- Generation Z. You may have heard this term thrown around a lot, but do we really know who the Gen Z consumers are?

Who are Gen Z Consumers?

Born between mid-1990s to early 2000s, Gen Z is the generation after Gen Y, also known as the Millenials. As they are considered the first true “digitally native” generation, the Gen Z cohort has not experienced life without the internet or mobile devices. On average, a Gen Z individual receives their first mobile phone around the age of 10, and spend at least 3 hours a day on their device. As many Gen Z children’s have parents have smartphones and tablets, how they play or entertain themselves has changed. Terms like “screen time” and “tablet time” have started to appear in many of Gen Z’s parents' vocabulary, alluding to the newest forms of play. As such, the constant direct exposure to advanced technology has made the newest generation the most technologically fluent group thus far. Other nicknames for this cohort include iGeneration, which comes from the boom of Apple “i” products, and Gen Z’s close relationship with technology. Growing up in a hyper-connected world, the Gen Z cohort is more in tune culturally, socio-economically, and environmentally than their preceding generations.

As some Gen Z individuals are reaching the age of 23, many from this cohort will be entering the workforce and beginning to contribute to the wider economy. It has become increasingly important to understand what impacts their spending patterns as they have huge market influence. To put it into perspective, by 2020 the Gen Z cohort will make up 40% of the US consumer spending. This statistic is significant as they will shortly take the spot of being the largest group of consumers worldwide. With their acute knowledge of technology, Gen Z consumers pay extra attention to what story a brand is telling, and their authenticity in doing so. As a result, they are quick to leave or build a brand relationship if it aligns with their values, tapping into their proficiency in intuition.

Additionally, Gen Z individuals also have direct influence with those from previous generation cohorts. A 2016 study conducted by HRC Advisory found that the Gen Z age group is influencing what their parents buy. Both children and their parents are in agreeance that there is significant influence from the child on purchase decisions. Between parents that are 21-41 to 42+ years old, an average of 84% say that their children have some influence on their buying decisions in regards to clothing. On the flip side, 93% of children (aged 10-17 years) report feeling they have some sway on their parent’s clothing purchases amongst other categories. With this much market influence with their immediate circles and the wider economy, the Gen Z population are to be taken seriously.

The Gen Z cohort and their buying patterns can be summed up as the experience-driven generation. Unlike the previous generations, Gen Z consumers seek more experiences rather than a material item. Due to their upbringing with technology, they are digitally literate and always connected. As such, they look to invest in experiences that foster meaningful connections rather than an inanimate item. Additionally, Gen Z individuals possess more entrepreneurial characteristics and are fearless self-starters. This is a crucial part in trying to understand this generation, as they continue to seek the next best thing. As the Gen Z age group may be the more entrepreneurial generation ever, they are always on the lookout for businesses who are adapting to the market just like they are.

Another aspect of the experience-driven generation is that they are a part of a cyclical pattern on influence. The Gen Z population is influenced by their peers, which cycles around as their peers are also influenced by them. 61% of Gen Z consider their social circles the most influential in their purchases. This trumps media influencers like bloggers and YouTubers (13%), athletes (14%), and celebrities (~7%) combined. Whatever Gen Z’s friends try, endorse, or share on their social media pages will make a greater impact on others in the same cohort. Catering to this leading demographic will unlock endless possibilities for your business. 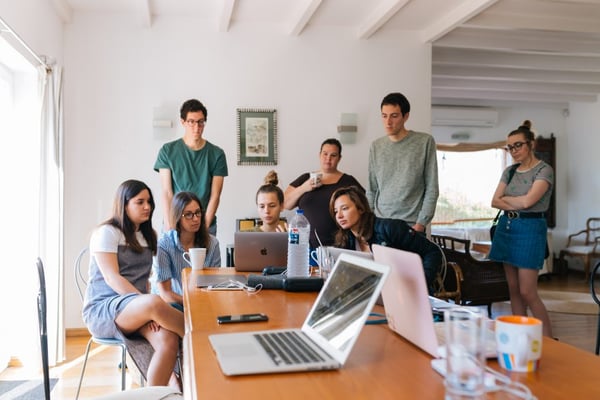 As many of the Gen Z cohort will soon be serious contributors to the economy, it is important to know their purchasing habits to know how to cater best to them

VR is the Answer to Winning Gen Z Consumers

So how would you convince Gen Z consumers to build a brand relationship with you? The answer is simple: Virtual Reality. VR is the business solution that will help draw this younger crowd in as it speaks to their desires directly.

Next Frontier for Authentic Experiences - Immersing a Gen Z consumer not only will encourage the positive “wow” reaction, but it allows them to have a perfect understanding of your story. VR is a powerful storytelling tool, connecting the author and audience in a way without any risk of misinterpretation. As Gen Z consumers continue to seek genuine encounters, VR will be the precise tool you need.

Building an Emotional Connection - We have previously covered that our senses play an integral role in emotional processing. As VR is a completely immersive experience, allowing Gen Z consumers to interact with your brand like never before. Since the Gen Z population are particularly interested in being connected, VR is the perfect tool for this nuanced group that appreciates and is passionate about meaningful experiences.

Free Publicity - As the Gen Z population is exceptionally engaged with digital social platforms, they are more likely to share impressive experiences on their social media. In addition, since all of their other Gen Z friends are also connected online, them sharing a post will be seen by hundreds, if not thousands, of people. As you can imagine, this becomes really handy for businesses. The term “viral” has become more common nowadays and is incredibly useful for brand awareness.

Your Target Audience has Changed, Have You?

Our technology is everchanging and continually has the drive an momentum to be bigger and better. There was a point in our lives where we though websites or smartphones had no place in our society. However, as a whole, we all have become more digitally literate to keep up with the times. If you’re in the market to attract the newest audience of consumers, it’s time to look into investing in the wants and needs of the evergrowing Gen Z cohort.

Here at Yulio, we strive for excellence in performance and integrity when it comes to our product, and customer service. To try our program for yourself, sign up for our free 30-day trial (no strings attached). To learn more about how VR can enhance your business workflow, sign up for our FREE 5-day email course.