Ever since Oculus’s announcement in mid-March, we have been anxiously waiting to try out the Oculus Quest for ourselves. Fortunately, we received our Quest during the first wave of shipments, and we have been testing the VR headset ever since. 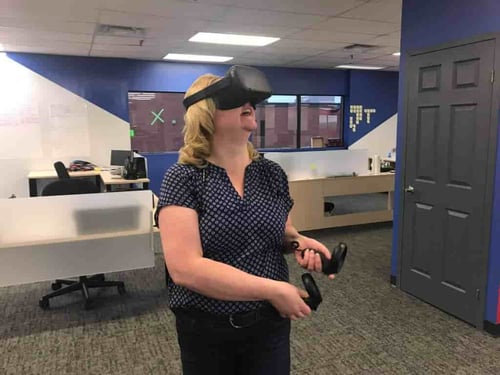 We really enjoyed breaking out the Oculus Quest and trying it out!

For a couple of weeks, we have been gathering our thoughts for a comprehensive Oculus Quest review. Before we dive into our first impressions and a review of the headset, let’s get to know the Quest a little more first.

Oculus is one of the most notable companies in the VR industry today. They have been extremely successful in producing a VR headset line that combines incredibly advanced technology while still being very user-friendly.

Their first release of the Oculus Rift was groundbreaking since the market at the time didn’t have any VR options for the average consumer. Fast forward a few years when Oculus released the Go that was revolutionary, yet again. Their first standalone headset was their most portable and accessible option, allowing their users to experience VR on the go. Oculus never fails to try to take VR hardware just one step further, and the Quest is no exception.

The Quest was designed to incorporate the winning characteristics from its predecessors to make the ultimate VR headset. As it is a standalone headset, the Quest combined the portability of the Go as well as the quality and level of immersion from the Rift. The Quest supports 6 degrees-of-freedom (DOF), which simply means that your movement in reality very closely matches up in VR. 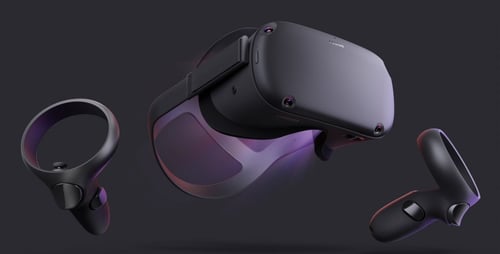 With this in mind, let's dive into our Oculus Quest review. Retrieved from: https://www.oculus.com/

When we first saw the Quest, we immediately noticed the sleek and sophisticated packaging. Oculus did a really great job at branding their latest headsets with the all-black box and display, making users feel like they are opening a premium product.

We were definitely impressed with the quality of immersion when we first started using the headset. After getting strapped into the headset, we noticed the graphics were smooth and clear, making the experience very enjoyable.

Many of us in the office played some of the games that were preloaded onto the headset. Previously, the game Beat Saber was only available for tethered VR headsets as it needed the controllers to play the game. Since the Quest is essentially a portable Rift, we really enjoyed playing the game with the freedom of mobility.

One of the most enticing aspects of the Quest was the fact that it was going to be a standalone headset that would support 6 DOF. Since this added convenience could be groundbreaking, we were naturally curious to see how Oculus would pull off this feat without external tracking sensors.

During the tutorial, you are tasked to set up the boundaries from where you will be using the headset. The sensors on the headset will then detect if you are out of bounds and send you a warning to take a step back into the safe zone.

Not only did we appreciate how Oculus addressed this safety hazard, but this new-found mobility was definitely our favourite feature of the headset. Since all of the sensors are built into the hardware, there is no need to allocate a specific space for a VR rig. Plus, with the improved tracking system within the headset and the controllers, the experience is incredibly advanced for a standalone system. We can definitely see a huge opportunity for Enterprise to utilize the Quest into their workflow.

Oculus is known for making products that the average consumer could afford and understand. Although VR has been around for quite a number of years, the technology can seem intimidating, especially for first-time users.

Our marketing team noted that the step-by-step tutorials on the Quest were very easy to follow and user-friendly, making it perfect for any users trying out VR for the first time.

The onboarding process was fit with animated tutorials that showed you what the controls were and allowed you to try it out for yourself before moving on. The interactive cartoons made it simple and intuitive to follow. It feels somewhat strange to say that the tutorials were fun, but they were! We were definitely amazed by how Oculus went to great lengths to get the user set up with the headset. Plus, the level of immersion and overall quality of the experience was top notch.

In terms of the technical aspect of the headset, the lenses were a definite step up from the previous headsets as well as the overall quality of immersion. Tracking in both the headset and the controllers were quite sophisticated, and we really appreciated that added touch of the minute finger movements that mimic what our hands were doing in real life.

Speaking of controllers, Oculus really stepped up their game in regards to their handsets. Not only are the controllers ergonomic, but it was pretty intuitive to learn how to use them well. 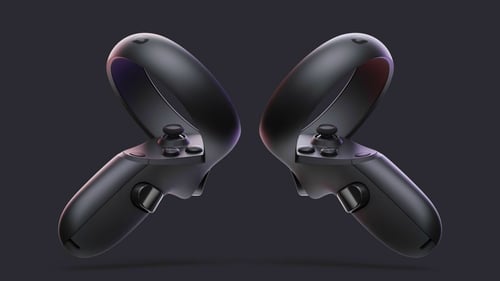 Check out the Quest's updated and ergonomic controllers. Retrieved from: https://www.oculus.com/

With the Quest combining the strengths from the Rift and Go, we believe that this headset is a good entry point for first-time users. Since the Quest is a standalone headset, there is no need for any other external support to use the hardware. Not only does this save you another couple thousand dollars, but this grab-and-go headset allows you to bring VR with you anywhere.

Although the Quest is a powerful machine for what it is, we still found that in certain situations, the headset broke the illusion of immersion. We found that when looking around your surroundings quickly, the headset couldn’t keep up.

VR hardware has definitely come a long way, however, there are numerous limitations that developers have to constantly work with. One huge limitation, and although it’s their selling point, the fact that the Quest is a standalone headset poses many barriers for excellent performance. The quality is definitely not as good as a tethered headset.

Tethered headsets are on average a better immersive experience as they have the added computing support from a PC. The better the computer is, the better the VR experience will be.

The Quest isn’t the most comfortable VR headset. Although the straps initially seem to support the headset on a user, after long periods of time, it can start weighing down your head or press against your forehead. Hopefully, Oculus could come out with a headset that is lighter or has more padding.

In addition, when combining the best parts of the Rift and the Go, you run the risk of also incorporating their limitations. As the Quest is a standalone headset, the headset can only support a finite amount of storage space and battery life. Both instances can be annoyingly inconvenient, especially if you need the headset for an important business meeting. Although the Quest does charge relatively quickly and hosts quite a bit of storage (insert storage options), this added inconvenience is a possible deterrent for some.

We did also notice that many of us in the office didn’t experience as much of the nauseous feeling we got from other headsets. Of course, this is purely dependant on the individual, but possibly VR hardware is slowly getting to the stage where VR motion sickness will no longer be a hindrance.

Overall, despite all the limitations, we are really enjoying our Oculus Quest. We definitely see how the headset can reach a diverse user base, targeting anyone from gamers to architects and designers. And although VR hardware has advanced up to this point, we are excited to see how the next generation of headsets will blow us away.

We hope you enjoyed our Oculus Quest review. We are currently working on optimizing the Yulio experience on the Quest to ensure you will have an enjoyable and memorable time. Stay tuned for further updates!

To learn more about us and what we offer, please visit our page or take our product tour. Or, if you’re interested in the other headsets that are set to be released this year, check out our overview here.

Why You Should have a Mobile VR Experience

How to view VR Without a Headset 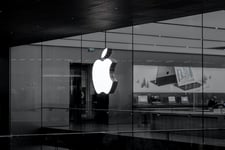