Charlie Fink is a former Disney, AOL and American Greetings executive. In the 90s, he ran VR pioneer Virtual World. Today he is a consultant, professional speaker, columnist for Forbes and author of " Charlie Fink's Metaverse, An AR Enabled Guide to VR and AR".

Kopin Corporation (NASDAQ:KOPN), launched as a spinoff of MIT in 1985, kicked off its efforts to deliver wearable technologies due to a special request from the military to improve situational awareness for soldiers. Since then, Kopin has become the leading supplier for AR HMDs for military applications, including those used in the F35 Joint Strike Fighter, for which Kopin provides microdisplays. Their clients include not only defense contractors (Rockwell Collins, Elbit, Thales and DRS), enterprise (Vuzix, Google, Fujitsu, Lenovo New Vision, and RealWear) and consumer (Intel/Recon, Garmin, and more). This spring, Kopin will release its first consumer product, SOLOS, stylish sports glasses that will Bluetooth anything on your phone to a light, inexpensive, high-resolution microdisplay. While Snap Spec did not catch on, they only took short videos for use on Snapchat.

One of Kopin’s CEO John Fan’s “Five Rules for Doing AR right” is to present the consumer with a light,
fashionable product that enhances an activity they are already doing.

SOLOS are something else altogether. And they’re $499. And here’s why: they may make what we’re already doing much better. While bikers and runners can now access performance data hands-free, it can also make other activities like consuming video on the go much better. It could be video consumption will be more popular than sports performance.

Dr. John C.C. Fan, founder and CEO of Kopin, shared his views on making great AR products with the audience at AR in Action (ARiA) at MIT on January 16th. See a video of his insightful and inspiring fifteen-minute talk, here, “Five Rules For Making AR Great,” 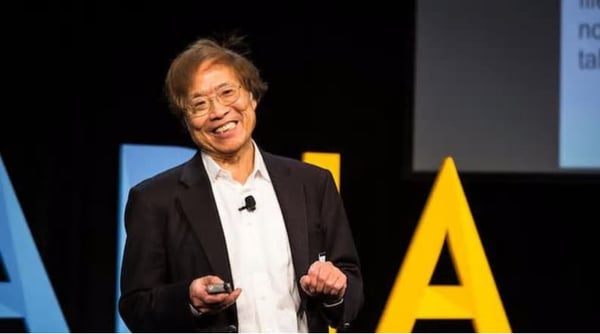 Kopin Founder and CEO John Fan has focused the company on wearable computing.

Fan’s Rules are designed to help innovators in the AR industry overcome challenges to achieve mainstream adoption of AR. These challenges include user resistance to wearables, overly complex learning curve and lack of clearly defined benefits. “Kopin has been creating augmented reality technology since long before the term even existed, and providing that technology to military, enterprise, and consumer markets. We’ve learned many lessons over the past few decades,” explained Fan.

“In the beginning, millions of years ago, man stood upright, on two feet,” Fan begins. “This created the modern man. Modern man can see, hear, communicate, and use his hands. We can manipulate our physical world. Our head is up, and we can see the horizon. And what has that led to? The smartphone man. He no longer understands the physical world. We have earbuds, but we cannot hear the voice outside. We look down on the screen, so all of a sudden we’re immersed in this digital world, or the virtual world, but we’ve lost the physical world.” Augmented reality gives man the world back by combining the physical with the digital.

Humans do not generally want to wear devices on their heads. If users are uncomfortable, they will reject innovation. Prioritize human ergonomics first, technology second.

“I wear glasses. Why?” Fan asked rhetorically. “To correct my vision. I wear it them all the time, so they have to be good-looking, comfortable, and aesthetically good. Correcting my vision is not enough. The military wears helmets to save lives. Or their own life. They don’t wear them because they want to, they wear them for a mission.”

“The first rule for a technologist is the human comes first,” Fan repeats for emphasis. “Humans by nature do not want to wear things on their head. So, therefore, the benefits have to be real, and substantial to encourage them to keep it on.”

Too much virtual content can easily overwhelm the brain. Deliver AR overlays in small, controlled bursts.

“You cannot provide too much data to them,” Fan says. “The brain cannot absorb it, and it will be confused. Many technologies can deliver graphics. So we’ll put it up, because we can do it. No, no, you’re talking about humans. Don’t confuse them. Don’t don’t jam everything in there.” Only what they need for that particular mission.

When people become claustrophobic they react predictably. The AR experience must preserve contact with the real world by not obstructing five senses.

Put another way, reality, physical reality, is the defining condition of augmented reality.

4. VOICE IS THE NEW TOUCH

Keyboards and touch screens require compromise. In AR, as in the real world, audio is the most effective and proven channel for command/control as well as transmitting and receiving information.

“The fourth rule is that we have to be able to interact with the virtual world the same way as we do with the physical world. Remember, AR glass really combines the two worlds together. In the two worlds together, in the physical world, the views, vision, and sound are the most important. There are three other senses, but mostly vision and sound. So what happens in the virtual world, we want to do the same thing. The display screen, and the sound,” said Fan.

One of the biggest tips for AR design is to be mindful of clutter. Do not overdesign by adding unnecessary features but design for clear, specific benefits to motivate adoption of AR. By doing so, your augmented reality design will have a distinct message that your audience will understand.

“The Final Rule,” concludes Dr. Fan, “is that we must balance the design, make it work, and give it flair. People have to accept that. People willing to put it on, people have to put it on for a long time, for the benefits. If they’re not doing that, the design will be a failure. And if you don’t have benefits, the system will be a failure. The benefit has to overwhelm the idea that people don’t want to wear anything on top.”

If Fan’s five rules hold true, we might see SOLOS on the un-sporty. And, if we do, it will confirm Fan’s thesis that man’s rise back to his original upright position is inevitable.

We’d like to thank Charlie Fink for his contribution to our blog on AR design from his collection of work. See more of his articles here.

Think you’re ready to dive into the world of VR/AR for yourself? Start learning about virtual reality in small simple sessions and take our 5-day email course. Or, if you're ready to move onto the big leagues - sign up for a free full-feature Yulio account here!

This post was originally featured on Forbes.com on October 30, 2017