Exploring new technology always means that there will be a whole new terminology to learn and breadth of knowledge to understand - especially a technology that can have such extensive uses like VR has.

But don’t fret! - fortunately, we’ve created a crash-course on virtual reality terminology and compiled 20 of the major terms that you need to know to sound like a VR expert in a matter of minutes.

This term stands for “virtual reality experience”, which essentially is what a session in VR is called. This is something we use at Yulio a lot and it’s becoming more and more widely used for a single VR story or experience.

This stands for “fixed point render” which, for mobile VR, is what a single viewpoint is called. When you’re in VR and you’re looking around a space, you’re standing in a fixed point render. FPR means that you’re viewing a single render from a fixed location so you can look around in 3-degrees of head movement, but you cannot walk or change perspective outside of where you’re standing. In Yulio, you can add and link multiple FPRs inside one VRE. So your full VR experience can contain many FPR scenes.

Navigational and audio hotspots allow the user to have a more rounded experience of the space which includes a better idea of distance, scale, and general ambiance the space holds.

Hotspots are a way to link multiple fixed point renders into a VR experience. Hotspots allow for: a better idea of size and scale, a way to navigate your virtual reality experience by simply looking and going, a way to see multiple design options, or perspectives. Adding hotspots in your virtual reality experience is a great way to make your designs more spatial and immersive in VR. In Yulio, you can adjust a hotspots size to create a feeling of depth and distance within a VRE.

Allows users to view, click, and drag their line of vision directly from their browser without having to download an app or put on a headset. This type of viewing meant to preview the VR content without having to immerse yourself completely with a headset.

Presence is what VR expert content creators strive for when they immerse their clients. The goal for VR content is to have the viewer to feel as if they are actually present within the content as opposed to just wearing earphones and a headset. The idea of having ‘presence’ is really asking how immersed the viewer feels in VR - ideally, the viewer should feel present in the VR content based on the quality of the experience versus the experience in real life.

Haptics refers to any sort of interaction and response through touch, or what users feel while they’re in VR. Haptics allow the user to feel more connected to the content they’re immersed in and can lead to a more memorable experience. An example of this in VR could be if the user is virtually traveling to a sunny or snowy destination. The user, although not literally experiencing warm sun or cold winds, can still experience the sensation through haptics.

HMD stands for, “head-mounted displays” - a vehicle for viewing VR that you wear on your head. HMD’s have screens that are in close proximity to the user’s eyes which allows them to immerse themselves by covering the entire field of vision. HMD’s range from headsets such as the Samsung Gear VR, Oculus Rift, or the more wired helmets that you may see in tethered VR like HTC Vive. Every headset varies in quality of the display, weight of the headset itself, and whether or not it is tethered, so if you’re considering investing in a head-mounted display, then make sure you know your options!

Interactive VR refers to a VR experience that is, well - interactive. This type of VR has components of storytelling which means that the user has more control in their environment and they can choose their own path within the experience  - similar to a ‘choose your own adventure’ story.

A good example of interactive VR is from the National Highway Transportation Safety Administration (NHTSA) - they released a ‘make your own decisions’ VR experience where you are a designated driver, and you need to make the appropriate decisions to be able to drive yourself and friends home safely, and based on your actions, determines the outcome of the night. This campaign was to raise awareness of making conscious safe decisions as a responsible adult at the bar. 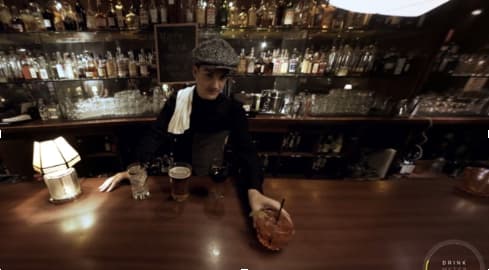 "Last Call” by NHTSA spotlights a 360 storytelling VR experience highlighting the importance of making responsible decisions
while out at a bar with friends which shows you the consequences of your actions. Source: AdWeek

Virtual visits refer to the total number of views or users who watch a VRE. Marketers looking to become VR experts will want to note this information because they can not only pinpoint who their users are and how large their audience is watching, but also what they respond to which includes what they look at more, and what may not be working during an early phase of marketing.

360 viewing is similar to an app-less viewer or the ‘fishbowl’ experience in that the content can be viewed without needing a VR headset. Many social platforms, like YouTube support 360 video, which allows people to click and drag around the experience, or physically move their phone around them to see the scene as if they’re in VR.

4D VR refers to an elevated or heightened experience of VR. Many different kinds of marketing campaigns include a 4D element layered onto a VR experience so that the user can have a much more emotionally connected experience to the content being presented.

Samsung has done some great campaigns in the past which include a 4D components such as roller coasters, motorcycles and more.

This essentially means creating an image for each eye, from a slightly different perspective. It helps create the sense of depth in some realistic VR. When captured at slightly different angles, two photos or videos create a greater sense of depth within the scene. Not all VRE’s are stereoscopic, however, if you’re viewing from a mobile VR headset, they most likely are. 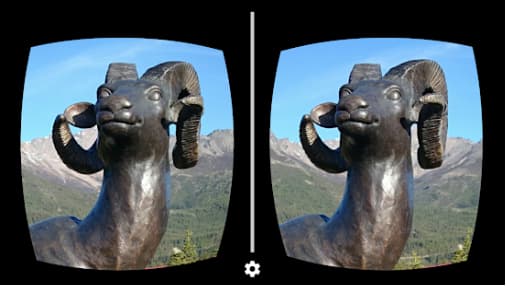 This stereoscopic view shows two slightly different angled images which allows the
user to have a better illusion of depth within the frames. Source: Google Play

A mobile VR headset will split the image for you so you have a two-eye experience and can have the enhanced illusion of depth within the VRE.

Stitching refers to the combination of multiple images or videos from multiple cameras to create one 360-degree experience. The idea is that from each device, the media can be ‘stitched’ together to create one unified design from which can be experienced in 360-degree viewing (from a browser or in VR). One issue that can arise from stitching is the evidence of the seams which show where one image or video stops and another begins (same idea as the seam of fabric - you can see where one fabric ends and another begins).

Similar to head tracking, eye tracking refers to how your sight is being tracked when looking within a VRE (as opposed to the position of your head).

In marketing, eye tracking can be used for heatmaps, which notes where the user has looked and creates saturated paths and points to show where the most time and focus were directed to within the media. Heat mapping technology can be used in a similar way by brands looking to understand the level of attention their products are drawing within displays densely filled with competitors. If products are being bypassed and/or specific competitive brands are getting high levels of engagement, brands are able to evaluate factors such as product packaging, location on displays, etc.

Heatmaps allow you to see where user attention is focused to within a VRE.

Position tracking refers to sensors that can determine where in a space you’re located and is used to continually track your movement to coordinate with your virtual movement within a VRE.

In tethered systems such as the HTC Vive, when in virtual reality, you can physically move your body and see the movement within the virtual space. Similarly, some VR headsets come with controllers that allow you to control your movement in the VR space, however in these, you’re not physically moving, but using your controller to dictate the movement. Position tracking is limited by the size of the room, and length of the cable (if using tethered VR).

FOV stands for “field of view”, and represents the range of vision of which the user can physically see. VR experiences, when wearing headsets such as the Samsung Gear VR, present the user with a field of view to the extent of their vision - reaching their peripheral vision which creates realistic immersion for the user. VR field of view does its best to mimic what the real human eye would see when looking at a space - so the higher field of view, the better (meaning, the further the user can see in a VRE without the content cutting to a black edge, the better immersion for the user).

Generally, latency refers to a glitch or lag between the VR content and what the real-life experience may be, which can deteriorate the VR experience for the user. An example could be if you’re immersed in video VR content, and the actions and dialogue of a character lags - here we would identify that there is poor latency because, in real-life, people’s actions don’t lag. Latency used to be a huge issue with VR back when it was initially being developed but isn’t a problem anymore.

Simulator sickness, similar to motion sickness, refers to the nauseous feeling that users get when there is a disconnect between what they see and what their body feels. When these aspects aren’t parallel with one another, users can feel uneasy, dizzy, and even get nauseous. This isn’t something that happens all the time, and it doesn’t affect everyone - but this confusion between your brain and your body means that visual cues of movement that you see aren’t processing in your brain correctly which would allow you to avoid simulator sickness.

As more and more people explore VR as a medium, and more use-cases are discovered, this list of basic terms will grow - but for the meantime, this should keep you abreast of virtual reality terminology.

If you’re interested in learning some more of the basics to VR take our 5-day free VR course or try your hand in creating a VR experience for free with a Yulio account.