Top 7 Insights from Over 1000 Hours of VR User Testing

Looking for someone who has decades of experience in VR learning? Pretty tough to find. When it comes to VR, Yulio’s very own Chief Product Officer, Ian Hall is pretty much as good as it gets. Not that you’d hear that from him. Ian has been working in the visualization space since 1994. Over 20 years. A lifetime in technology. Back then, in the original, early 90s introduction of VR it consisted of gigantic, neck numbing headsets which offered very little in the way of movement but plenty in the way of nausea. It has come a long way since those early ventures and Ian has been there throughout. He and other members of his team at Yulio have logged more than 1000 hours of user testing and VR learning, working with subjects from ages 2 to 86 as they took their first steps and then journeyed into the immersive world of VR. As you’d expect, there have been a lot of insights gained along the way. Here are some of the best which may just help you deliver an incredible VR experience first time around;

Our #1 VR Learning: Say no to headstraps

This sounds silly, we know. But it’s a fact that people are sensitive about how they look. Many people become uncomfortable and self-conscious if asked to strap on a headset that risks messing up their hair and/or makeup - especially in a business environment. After seeing a large number of test subjects, including men and women of all ages, be reluctant to look at a VR experience, we knew it was causing a barrier to VR enjoyment and adoption. Ian personally cut the head straps off all of our VR sets in the Yulio lab and they’ve never been seen since. When using VR, you want to avoid any barriers that might get in the way of people fully engaging with an experience and one way to do that is by keeping them looking sharp. It sounds simple, but it came up over and over again throughout our VR learning hours - so save yourself some trouble and get rid of those straps. 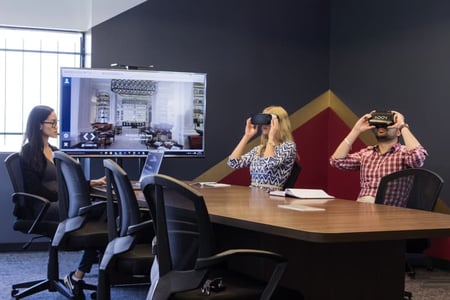 Pop in and out

Several of our clients have reported that while their end clients were anxious to use VR to better understand a design, they wanted to use it as a jumping off point for conversation and engagement - not spend a lot of time exploring the VR scene in isolation. This has been borne out in our labs, and during our many VR collaborate sessions (Collaborate is a Yulio feature that lets users join and view a VR scene together - think webex for VR). Users typically spend about 40 seconds looking at a scene before their natural inclination is to lower the headset and discuss. And they almost always start looking into the center of the design, then glance up, and to the right. So you can anticipate what they’ll be discussing first.

For many people using VR in a business setting, it’s a new and unfamiliar experience. It can cause some anxiety with users being wary of feeling foolish, nauseous or feeling blindfolded by the VR headset. The simple, yet ultra-effective solution to this is creating a ‘Fast VR’ experience whereby users can simply raise the headset to glance inside, then put it down and talk about what they saw. The user maintains control and is able to dwell on the experience for as long as they feel comfortable with. And it’s yet another reason we believe headstraps are the enemy of Fast VR. 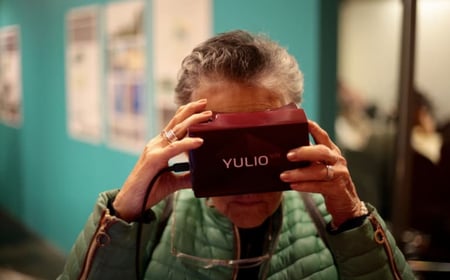 Mobile is the way to practical VR 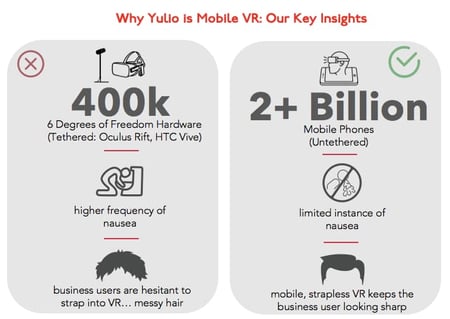 Our years of user testing have led us to focus on mobile VR, while we remain ready to embrace tethered headsets

Don’t get us wrong, tethered headsets are incredible. Yulio has several in its lab and most Yulio employees spend some time in one every week to live out their VR dreams. They deliver an unmatchable immersive experience that can seriously blur the line between real and virtual. For business, however, they just aren’t that practical. The clue is in the title. Tethered rigs limit use to in-office and we've heard from countless A&D professionals that more than 80% of their designer-client interactions happen elsewhere. While the novelty of complex tethered headsets might wow clients in the short term, delivering VR through mobile means it can be set up in seconds and used anywhere, at any time.

Immersed shouldn’t mean isolated. Providing social connectors can help people feel far more comfortable in a VR experience and know they aren't doing something silly or embarrassing. Broadcast what the user is seeing on a monitor so that it attracts attention to the experience and gets everyone involved. By doing this, the user is able to lead a wider experience and gain validation and assurance from those around them. And, when no one is actively using the VR experience, you can still be showcasing a series of images. 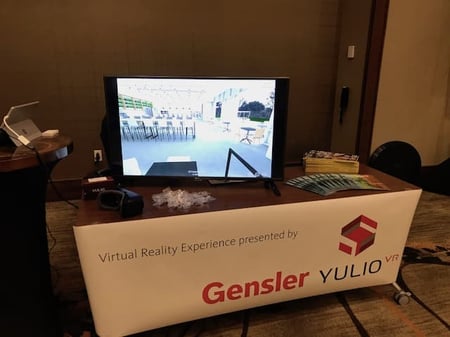 When we attend tradeshows, Yulio always projects VR experiences onto a monitor

For as many headsets as Ian and the Yulio team have owned and experimented with, they realize they aren’t yet in every home and every office. Because of this, it makes sense that all VR experiences should be accessible without them. Yulio VREs are all viewable via a web-based FishTank Mode meaning everyone can turn on any device and see what all the fuss is about. Although you lose some sense of scale and space vs. viewing a stereoscopic image in a VR headset, a browser-based viewer lets extremely motion sensitive or remote viewers view a scene in an approximation of VR. And for the record - most fishtank viewers (83%) start by dragging the scene up, and to the right.

Where to use it? Everywhere.

VR is a compelling combination of novel, practical and cool and those most successfully leveraging the technology are making the most of this unique feature set. It draws interest and excitement from people who have heard of the technology but never used it - and at this point in time, there are still many of those. We don’t expect it to last - an increasing number of companies are writing VR presentations into their A&D RFPs. But for now, be ready to show off with a  portfolio in your pocket. Storing A&D portfolios on a mobile device and carrying lightweight Homido glasses means design work can be shown off at any moment. By planning ahead we've seen realtors able to virtually transform empty blank space giving clients an on-the-spot virtual sample of what they could eventually create. By letting those same clients walk away with realtor branded viewing goggles and the experience uploaded to their phone, designer profiles can be raised and reputations cemented. 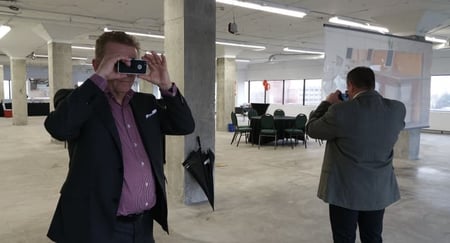 Get creative and experiment

Our mission at Yulio has always been to create great, practical tools and then get out of the way to let users get creative. We see their VR learning improve exponentially when we do. It’s worked out well. Through giving designers and marketers the tool to flex their muscles, we’ve seen some great ways that design and brand stories can be told. The medium is young, and the winners are those taking chances through experimentation and trying ever more engaging ways to tell a great story. Use these learnings to ensure your story gets told without barriers like head straps, or negative experiences like a feeling of isolation get in the way of that story.

For much more detail on all we’ve learned in our virtual adventures, sign up for Yulio’s free 5-day course on Business VR. Give us 10 minutes a day and you’ll be on your way to VR expertise….you can skip 999 hours or so.