VR Education in the Next Generation

VR is intrinsically associated with the future, especially in the field of architecture. But what do you do when the future arrives? Or more specifically, when it’s applying for a job at your design firm? Job openings with the word “VR” in them have increased 4x since 2014 according to indeed.com and there are plenty of rumors about the tech giants hiring VR experts for undisclosed plans, from an increasing body of students with VR education. 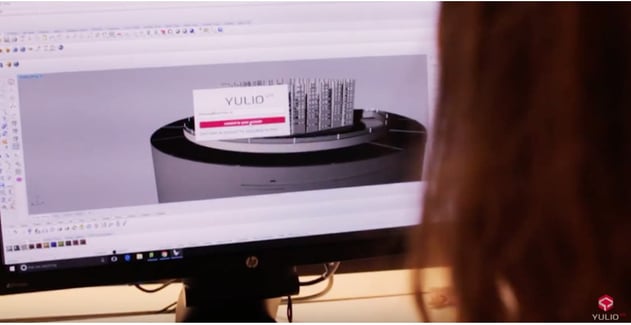 But what about the practical, everyday version of VR used in business? Not the 3D coders and programmers, but those in the design, sales and marketing fields who are using VR as a new medium. There are a growing number of VR education classes and exhibits being put on by colleges and universities which recognize the role VR plays in business. And Yulio has been a partner of Ryerson University in Toronto for a few years - at Ryerson, architecture, and interior design students use Yulio as part of their core curriculum. Post-secondary institutions are a great place to see where the future is headed - with each generation lasting just four years, the career training trends make their way into the workforce fast. To understand where the industry is headed, look to its future practitioners and how they will approach design and problem-solving.

From the Mouths of A&D Students

Today we’re sharing what we’ve learned from students using Yulio about how they see the future of VR. We recently conducted a survey with a group of architectural design students who were exposed to VR education during the very first year of their program. We were interested to understand directly from the designer’s fingertips, what the next generation of architects found most useful about working with VR, where they saw its primary values and how they saw its future in their industry.

Once familiar with the technology, the majority of students saw it as a logical part of the development and communication of their design work with over 80% saying they were (at least) very likely to use VR on future design projects and 100% believing it was likely other design students would want to use the technology. Their VR education will follow these students into the field.

Over 80% of students envision themselves using VR in future designs

The idea that the next generation of A&D professionals are championing the introduction of VR in firms they join after graduation was borne out in a recent conversation with 30-person architectural practice ALSC Architects based in Spokane, Washington. ALSC had been introduced to VR by its newest and youngest employee and was then adopted and implemented into company operations by its senior team. For them, the communication of project design iterations to clients via VR was found to inspire higher levels of client feedback and collaboration which it was felt led to the firm delivering better overall designs.

77% of respondents believe A&D professionals will be very open to using VR in their workflows. It was felt that VR exercised an additional set of muscles, forcing designers to pay greater attention to the impact of floor and ceiling treatments which become a more integral part of a design when viewed in 360 degrees. Designers also felt that working in VR led to them having a greater sensitivity as to how light and shadows will play within an environment and generally inspired a closer attention to detail. Long established designers we talk to sometimes believe they don’t need VR to check or collaborate on their own work, and that it’s more of a client communication tool. But we’ve seen examples where designers have said that without VR, they simply wouldn’t have noticed an issue. Nvidia, for example (a California tech design company), was designing a new office space with plenty of skylights to take advantage of natural light. But when they looked at in VR, the resulting flow of light from above would clearly have been a problem for web developers experiencing glare on their computer monitors. They removed more than half of the skylights from the design before breaking ground - saving money on the install and a fix for the problem it would cause later on...all because of VR. That VR “check” represents a shift in design. While designers used to set a window onto a scene, control is now more with the viewer - the client who immediately looks up and sees a blank space where a ceiling treatment should be will be disappointed that designers didn’t fill in all the gaps. Consider ceilings, floors, lighting, and height when designing in VR. See this post for more of our tips on transitioning from 2D to VR - some of which came from seeing the common mistakes our student users made in their first designs, and which using VR in their practice is teaching them to avoid.

When asked how receptive they believed the general public would be to having design work communicated to them via VR 95% of respondents said they thought people would be very receptive. This sense of ending the “I just can’t see it” comment from clients is, unsurprisingly, one of the biggest drivers of VR adoption in the A&D space. Sharing a window into a design vision where the client can be immersed in the space helps firms communicate ideas and get faster revision and sign off, but also gives firms confidence that what they are building will match what their clients want. ALSC in Washington commented that using VR gives clients enough confidence to ask questions and feedback, and thus push the design concept further with better collaboration. A generation of students who are accustomed to sharing an unambiguous vision in VR will be entering the workforce and pushing the boundaries of VR client communication. Much like there have been generational shifts where the use of computers, the internet, smartphones, etc have become new norms in business, in almost every case, the survey responses indicate the next generation of architecture students are seeing VR not as a new or emerging technology but as an integral tool for their craft. Check out our infographic for more details on what our students uncovered with VR: 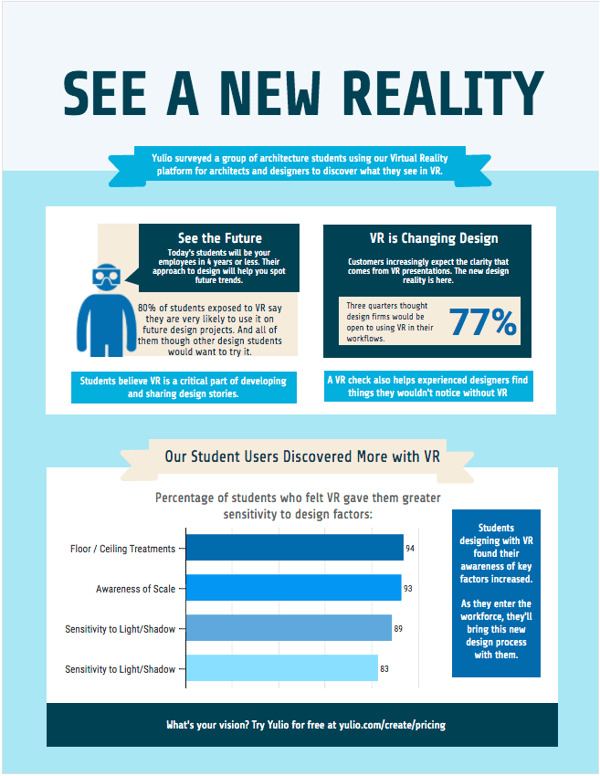