Why it works, what it can tell you and some ideas that worked.

The power of VR is increasingly being leveraged by creatives within entertainment, sales, design, education, and retail. With its unique potential to drive heightened customer experiences and track data from those experiences in rich detail, marketers are seeing the potential of deep customer engagement and exploring VR for marketing.

Why is VR important?

Adoption is on the rise.

There are already an estimated 43 million people using the technology and that figure is set to double next year and double again the following. That’s a pretty big audience you can’t ignore.

People who use it, tell others.

An estimated 81% of people who try VR tell their friends about it and 71% of Gen Z – the generation following millennials who make up the next wave of serious consumers – are interested in seeing what it can deliver and will grow up with corporate leaders working with VR for marketing.

It adds something special which people respond to.

Whether it’s immersive storytelling, communication of complex spatial design, the showcasing of products in curated environments or virtual, ‘in-the-seat’ experiences, VR brings a heightened platform for translating ideas into experiences that people are engaged by. In fact, 53% of people would prefer to buy from a company that uses VR over one that doesn’t.

A lot of serious organizations are getting involved.

30% of Forbes Global 2000 consumer-facing companies will experiment with augmented and virtual reality this year and many of those experiments will be with VR for marketing.

People are wired to respond.

VR has a power that goes beyond simply providing a cool experience. Humans are wired to have their behavior more directly influenced by virtual experiences as they appeal to three key areas of our brains responsible for our perceptions and reaction - neocortex (higher-level thinking), limbic system (emotion, behavior, motivation), and reptilian brain (primitive instincts). What this means is that content and experiences communicated through VR are experienced versus simply being seen and this triggers the parts of the brain that more clearly influence behavior, making VR for marketing a key way to influence decision making.

Some Recent VR for Marketing Wins

We’ve talked a lot about some very successful VR business ideas that have driven VR ROI (check out those ideas here and here) but one of the attributes that are specific to VR for marketing is the value of VR as a novel experience that generates hype and shared experiences around your brand. Some of the world’s biggest brands have been using VR successfully as a hype engine and a new way to engage customers:

McDonald’s already gives out (probably) millions of cardboard boxes daily in their Happy Meal boxes. They’ve piloted using them to release their own version of Google Cardboard inside with a skiing game called Slope Stars, in partnership with a ski holiday company in Sweden. McDonald’s are masters of marketing and have found a way to add reusability, play value and hype to an existing program through VR.

TopShop tied into London Fashion week and gave regular members of the public a front-row seat at their show with a 360 panoramic video stream. They made an exclusive event accessible to their customers - an example of when VR makes something too far away or exclusive suddenly accessible. 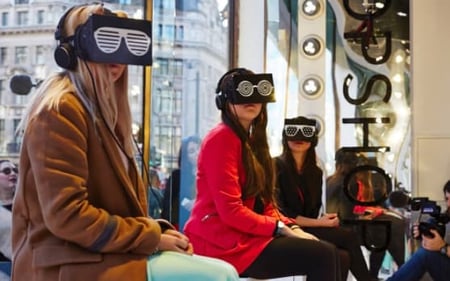 The automotive industry generally has made great use of VR for marketing. They are working with products that have many permutations and are expensive to model, so it’s a logical fit. Volvo used a VR app to launch their XC90 SUV that puts you in the driver’s seat and lets you take a drive through the country.  The Volvo brand has struggled to seem modern and slick vs. some of their competitors and adopting VR may get new customer segments talking about them again.

Photo credit: volvocars.com - Volvo promotes the experience on their homepage

Marriott is all about getting people to stay in places far away from home. They created a VR experience that they called a “teleporter” that let you experience a Marriott hotel and a Hawaii beach. They took the experience further with wind machines and other 4D style immersions. And while no one would say it was the same as being there, the goal was to create a situation where customers could picture themselves on the vacation - and have a better sense of seeing and experiencing something before booking. This is an example of a true ‘try before you buy’ experience, and similar variations have been used by Carnival Cruises and Thomas Cook with ROI success. 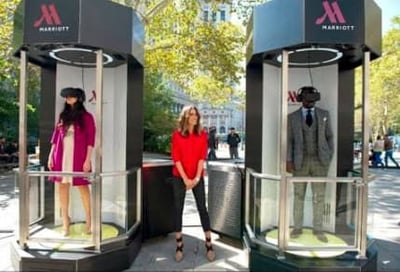 Coca-Cola has always had a significant marketing push around the Christmas season - they tie their brand to warm feelings of family and friends gathering in the season. They helped invent the modern image of a cheerful, cartoony Santa Claus and have launched winter campaigns with polar bears that took on a life of their own. In 2016, they created a VR sleigh ride experience in Poland and let people tour a virtual world as if they were Santa. This VR experience was a way to tie Coca Cola’s heritage into new and modern media. 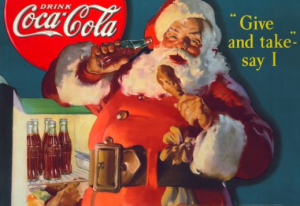 With this momentum growing within the use of VR in both consumer and business environments, marketers working with the best VR platforms are now able to access and leverage a new wealth of analytical data in order to better understand and market to their customers. Yulio developed its analytics platform based on allowing those in the A&D community to gain insights into, not only if their designs are being viewed, but when, where and how.

What are the practical applications for using this data?

Imagine the marketing department of a new housing development send out an email to its database featuring details of a newly designed building and including a VR experience in order for people to explore the proposed development as if it were already built. Whether the objective was to push early sales or simply continuing to build relationships with potential new clients, insight from VR analytics can be an immensely powerful tool. Instead of having to use guesswork on how to follow up, analytics lets marketers see precisely when a design has been viewed, where it was viewed and with which device. If a design is viewed via a desktop i.e. as a fishtank view, marketing teams can offer, or proactively send out, a company branded headset with a note suggesting they might like a little more immersive view. The time content is viewed also provides a great steer on when would likely work for a follow-up. 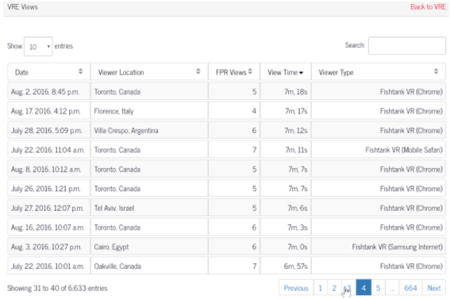 For organizations using VR designs as part of their social media marketing efforts or embedding them on web pages, analytics can be used to clearly show which are the most popular designs and which led to calls to action being followed. Testing for wide-scale preference in design can also be highly effective using VR analytics. Using an example of a new apartment building complex which offers varying finish combinations for kitchens and bathrooms, through tracking VR user data, insights can be gathered in which color or specification combinations are viewed most often but never led to purchases. This insight can enable organizations to tweak their offerings directly in line with viewer preferences and behavior. It also offers a deeper understanding of the customer journey, may uncover different regional preferences or the sticking points which people look at multiple times before buying something. Yulio is launching heat maps for marketers soon, which will let marketers see exactly where VR viewers spent most of their attention. The technology allows for a more accurate view of what really draws attention - in traditional desktop heat mapping, the data assumes that mouse location is a proxy for eyeballs...whereas, in VR, you can see an unambiguous map of a prospect’s eye patterns. The data could potentially be used to compare and contrast where buyers vs. non-buyers looked, what became sticking points and which elements that led to sales should be added to other product experiences. 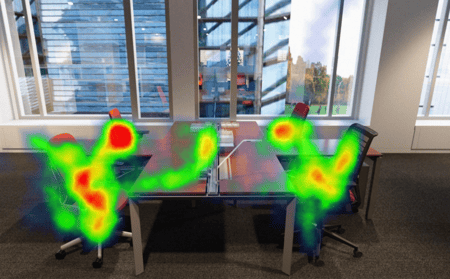 VR can create compelling brand experiences, engage and influence better than other ad media and measure actual interaction to close the sales loop. So whether marketers are looking to create compelling content that drives action through appealing to our keenest receptors or to gain keen insight into when, where and how we engage with content, VR is the next big thing. Get VR integrated into your practice with help from our FREE 5-day email course, and try it yourself for free.

VR in Corporate Design: Encouraging Inclusivity through Empathy and Understanding