We talk a lot about VR allowing people to experience environments or realities that don’t yet exist. But with 360 photos for VR, virtual reality becomes more like a modern-day equivalent of Star Trek’s Scotty. Using the latest 360° cameras, VR can be used to ‘beam’ a viewer right into the heart of an existing location, in a fully immersive image by using software for transferring 360 photography to VR. 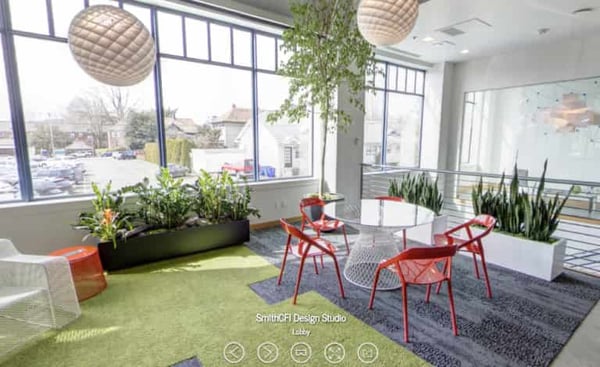 HyphnDesign Studio, profiled on their website with 360 photography to VR

There are several smart commercial applications for using photography visuals through VR, but before getting into the best of these, we’ll take a look at a few things to consider when translating 360 photography to VR.

While we won’t get into naming names and choosing hardware favorites in this post, suffice to say, a great 360° camera will do exactly what its name suggests, offer 360 degrees of capture ideally with no need for additional image processing or manipulation to stitch footage together. Camera prices range from about $200 to thousands, but you should know there’s usually a pretty direct correlation between price and resolution. The higher the cost, the greater the resolution. But there’s another significant difference - some cameras shoot stereoscopic images, while many cheaper ones are monoscopic. Stereoscopic cameras: will typically be more expensive and less common. They essentially shoot a 3D rendering of your image for the left and right eye - and this is what amps up the VR effect in a VR headset. 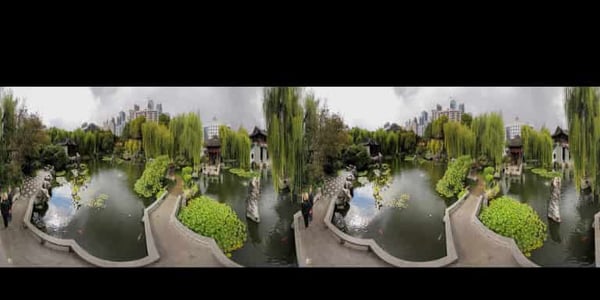 A stereoscopic image for left and right eyes from a 360 camera courtesy of http://www.mtbs3d.com/

Monoscopic cameras are much more common. They create flat 360 degree images that can be viewed on a screen or in a VR headset, but they have more limited immersiveness and change the degree of depth perception. These are the images you’ll see on a YouTube 360 player. 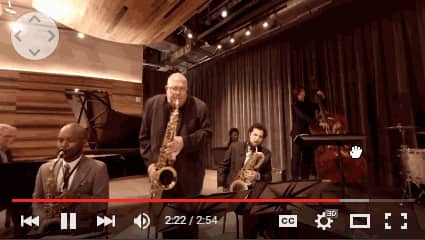 Monoscopic cameras are sufficient for images being viewed mostly without a headset, and certainly for beginners. If you plan to use images often on your website, to promote your business or show off your design work, it’s worth investing in a camera where the software does all the heavy lifting to produce a fully spherical image and also make the process of editing and sharing captured footage quick and painless.

The best position for the camera in any scene corresponds directly to where you would stand if you wanted to get the best view. Position the camera in the center of a scene so there is plenty to look at in every direction. Set it to the height of an average person (typically 5’7” in North America) so people don’t feel like they’re either floating or have come to the scene without their legs. Remember that 360° cameras capture everything, including adjustable arms on a tripod if they stick out too far. Popular alternatives to tripods for 360° shooting are light stands, as they have small fixture points and no levers to reach into the shot. You also need to ensure you personally don’t feature in any footage being captured, if you don’t want to be seen. Fortunately, most 360° cameras come with the ability to activate them remotely via a mobile app enabling you to find a good spot to disappear.

Some key use cases for 360 Photography to VR:

The ability to immerse viewers in existing environments via VR is particularly effective where distance is an issue. For overseas real estate investors, the ability to remotely tour potential new property purchases is pretty powerful. Photo VR lets them experience actual room layouts, style, and specifications without going on lengthy and expensive long-distance trips. We contributed to an interesting piece for South China Morning Post on how this growing phenomenon is changing the overseas property buying market in China.

By creating VR experiences from 2D designs, virtual reality has dramatically changed how the allure of an unbuilt property can be communicated to a potential buyer. In the same way, capturing 360° imagery of completed projects and allowing potential new clients to view these via VR is a great way to communicate your work. With entire virtual portfolios able to be held on a mobile device, having a lightweight viewer such as a Homido on hand means these types of immersive virtual presentations can also be done anywhere and at any time.

Using a combination of 360° photography to VR and computer rendered designs, those in commercial real estate are now able to demonstrate the current and future look of commercial dwellings in parallel. Using 360 photos for VR, potential tenants or commercial buyers can remotely view properties in their current form. Combine this with a traditional CAD rendering of what could be, or a 360 photo of a similar completed space to help visually transform the space.

Beyond these few, there are numerous other use cases where 360° photography to VR translations are are offering marketers, educators and sales teams unique ways of engaging and informing audiences. From virtual retail stores to virtual training and virtual tourism, the ability to immerse people in real environments that are either too remote, sensitive or dangerous to be easily experienced in person, is having a growing impact on businesses … and it’s only just getting started. Already have a 360 camera? You can upload your shot to a free yulio account and see how it translates to VR at any time. Check out our no strings attached, free account option and you can have your first VR experience running in minutes.