Apple is one of the largest tech companies in our global economy and their products greatly influence how the world uses technology. This revolutionary tech giant continues to lead the charge in innovation while staying true to simple design, including heavy investments in VR. Just last year, Apple became the world’s first public company to hit the $1 trillion valuation, beating their Silicon Valley rivals like Amazon and Microsoft. Apple seems to have the Midas touch as so many of their products have generated international uproar and overwhelming success.

Apple hosted another one of their special events announcing a whole new range of products and upgrades, including a highly anticipated product: the Apple Card. Almost immediately, news outlets and social media pages were flooded with talk about the future release of the card. Set to be available this Summer, the Apple Card is a blending of the physical and virtual world, which will create even greater comfort in digital tech in daily life. 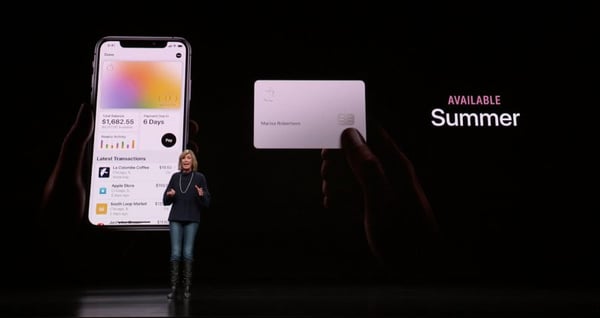 The new wave of the digital age will be available this Summer! (retrieved from: https://bit.ly/2HXEtpp)

Why Does this Matter?

The main point of the Apple Card is to give people a greater sense of control over their banking and finances in a way that isn’t confusing through the use of technology. Apple’s shift towards going digital is part of a trend to changing objects we interact with on a daily basis into virtual concepts. Additionally, the product meets their clients where they’re at. With a focus on clarity and keeping it concise, Apple made a system that appeals to the masses, especially the younger generation.

Before we dive into how and why the Apple Card will be revolutionary, let us first explore what the product is.

What is the Apple Card?

The Apple Card is a credit card created by Apple in collaboration with Goldman Sachs and MasterCard, promising to give people greater sense of their banking and finances in a clear and simple way, chiefly through visualizing data and integration with daily life. Located in its Wallet app, the Apple Card will introduce clients to a new phase of going digital.

Transparency and Utilization: The Apple Card creatively utilizes their already existing apps in addition to new card features in a simple and innovative way. From showing where a particular transaction was made with Apple Maps to their newest slide feature that clearly communicates how much interest would be charged, all of the card’s features are geared towards generating greater transparency and understanding by presenting data in new more visual ways.

New Wave of Support: Instead of calling their support hotline and waiting who knows how long before an available representative picks up the phone, simply text in your question or a change you would like to make. Expect an answer to your question in a matter of minutes.

One aspect of the Apple Card that deserves an honourable mention and has garnered a lot of design attention is the physical copy of the digital card. Along with the Apple Card, you will receive a titanium laser etched physical card for places that don’t use Apple Pay. The sleek and creative design, we predict, could be just enough to convince those interested in the product to invest in it. 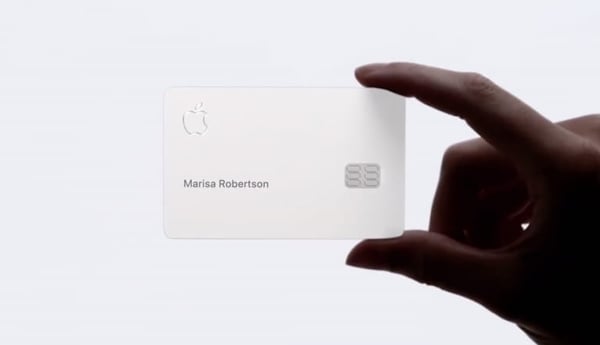 The physical version of the Apple Card is an elegant card to be used with the digital credit card. (retrieved from: https://bit.ly/2JM6JxS)

Why is the Apple Card Important to Tech Change?

Rethinking a concept or design that we are perfectly acquainted with is difficult, yet Apple does it so seamlessly. Everything now will be done digitally, which includes applying for the card, making transactions, and seeking support. Some companies don’t have a 24/7 support line, and even when you try to call, you’re met with staying on hold for who knows how long. Apple has created a solution with its new system of 24/7 text support, further improving previous processes in a new and fresh way.

The emergence of the Apple Card gives a lot of insight as to where we are heading into the next phase of digital transformation. This is a huge step made by one of the most prolific tech companies in the world to combine a physical process with a virtual one. Especially for those who are more skeptical about virtual technology, the Apple Card is a good stepping stone. Previously, banks issuing cards would hand over the physical copy first, and then provide supplementary online software to help you track your expenses and to view your eStatements. The Apple Card completely flips that process around by providing first the virtual copy then a supplementary physical version in case stores don’t have Apple Pay. Apple is becoming another player in harnessing the power of going virtual.

We have previously covered who the Gen Z population are and how virtual products and experiences could be key to winning this demographic. Apple has recognized that a large portion of their clientele is made up of the younger generation, like Gen Z and Millennials. Creating a product that appeals to this demographic is a brilliant step as the younger population are entering the workforce, and will soon become contributors to the wider economy.

It’s also important to note that Apple does a difficult thing really well: they listen to their audience. It’s no surprise that the Apple physical card is designed the way it is. The current style that is on trend with the younger generation is a minimalist and neutral palette, which is exactly what the card is. With following the change of design and people’s tastes, Apple’s product caters to the evergrowing population of Gen Z and Millennials. Following the same suit is key to ensuring business in the future with a demographic that will soon account for 40% of the US consumer spending.

The Apple AR glasses are still officially just a theory, however, there is concrete evidence that they will be on the market soon. With the release of Apple’s virtual Apple Card, we’re really curious to see how Apple may tie these two ends together. Who knows, perhaps in the foreseeable future, all you would need to do to make a purchase is to simply look at an object. However, this is still just purely speculation. We are all excited to see Apple’s new Apple Card launch in the Summer, and how the release will shape people’s perception of going virtual.

Here at Yulio, we strive for excellence in performance and integrity when it comes to our product, and customer service. Check out our Whitepaper on the right way to integrate VR into your business for maximum ROI. To learn more about us and what we offer, please visit our page or take our product tour.