Mobile VR or Tethered? That is the question (for businesses).

Virtual reality in any format, be it full tethered rig VR (like Oculus Rift)  or mobile VR headsets (such as Google Cardboard or Samsung Gear VR), has a few key jobs it can perform for your business: sharing your vision, accelerating your sales pipeline, adding new lead generation channels or helping your clients make better, quicker decisions. If you’re ready to bring virtual reality to your business, your success will depend on a few key things:

Whether the idea for implementing VR is to communicate complex interior designs to remote clients, allow shoppers to browse stylized virtual showrooms or immerse potential donors in environments they’re being asked to contribute to, if the execution is clunky or ill-considered, it can do more harm than good.   There are ways to design specifically with VR in mind that can take an experience beyond being a novelty and make it an integral part of how a business operates. We recently offered some great tips on designing for VR which you can read here.

For now, however, we’re going to concentrate on the second element-

When you think of VR, you might picture tethered VR headsets. These are the ones with cables coming out the back of the headset, where people can move around and experience space. Because of the cost and complexity of these rigs, mobile VR headsets, where you pop a smartphone in a viewing device are far more common. These track head movements and users can “move” by looking, but cannot walk around. The difference is sometimes described in degrees of freedom, where tethered creates 6-degrees-of-freedom, while mobile allows for 3-degrees-of-freedom. Put more simply, with tethered VR you can walk around a room or space. In mobile, you stand still and look around that room in 360 degrees with head motion only. 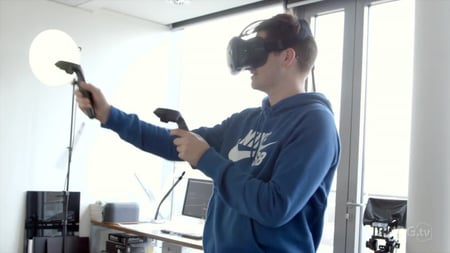 The tethered headset for the business category is led by VR A-listers, Oculus Rift, and HTC Vive. Both devices support lateral movement and offer exceptionally high-quality visuals. They do so, however, at the expense, both figuratively and literally, of being tethered to a powerful PC by a four-meter cable. Both companies are working on standalone systems where the computer sits inside the headset, which will remove that physical attachment, to the benefit of ‘tethered’ VR’s future.

Tethered VR requires dedicated space, and we suggest about 3m x 3m to accommodate most safe movement, but at least 2m x 2m. For Vive, you need to setup two laser tracking spots at opposite corners, which provides the 360 tracking of the users. Oculus Rift has 180-degree tracking if you don’t purchase the additional sensors.   You’ll also need sufficient computing power to run the tethered VR rigs. You’ll need a computer capable of running 90 frames of animation per second, per eye which the headsets are built around. To do so you need a strong graphics card and enough hard drive space to handle the game files. You can still run the rig with less PC power, but the images will be of lower quality, and if the graphics are lagging, you’ll probably find there’s a much higher chance of nausea.

The ‘wow factor’ associated with the higher-end headsets is genuinely amazing,  but there are drawbacks. Tethering restricts viable uses to fixed spaces. So the best executions are setups like a trade show booth, an event installation or a dedicated space in your office boardroom. There’s no question the novelty will draw a crowd at events. But we’ve seen many booths with a sick bucket tucked into a corner because being strapped into VR is more likely than mobile to cause simulator sickness. You also need a safety supervisor hanging around to wrangle cables and make sure no one trips.

With costs for an Oculus Rift device also starting at around $600 and HTC Vive starting at $800 (not including the PC required to run them which can cost around $1000), these devices do represent some significant outlay. They absolutely make a splash for a key event or tradeshow. They just don’t allow you to integrate VR into your everyday business because of the restrictions of the technology.   If your firm is serious about using and integrating VR into your practice, you should have a rig setup for testing and experimenting...and understanding what great VR experience can look like by viewing other VR software. Many of the clients we work with who are leading in VR innovation have a tethered experience as a lab in their offices and use mobile VR for practical presentations. 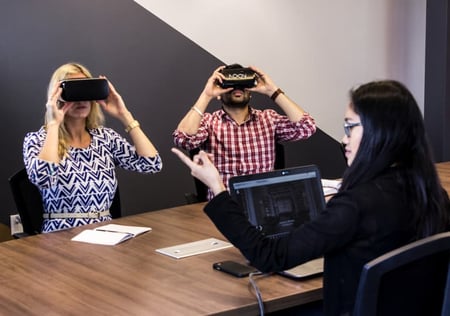 With the ubiquity of smartphones, mobile-powered VR offers a different level of flexibility when it comes to implementing a VR component to a business. Headsets which rely on a mobile device to power the experience range from Samsung Gear and Noon which offer a fully immersive experience, and cost around $120, through to functional, inexpensive devices such as Google Cardboard or Homido Mini which cost around $15.

At this point, it’s absolutely true that mobile VR isn’t able to match the level of immersion in visuals and movement that a tethered headset allows. But for the vast majority of business use cases, it is more than adequate. Rather than supporting lateral movement, mobile VR primarily tracks head motion from a fixed point in a virtual environment and utilizes techniques to approximate movement such as ‘gaze-to-go’ points or links which transport viewers to alternate vantage points in a scene or to different locations.

There are plenty of advantages to mobile VR which make it practical for business use. Obviously, it’s literally mobile - you can take it anywhere. Which means you can conduct VR presentations at your client's office, or take your VR portfolio anywhere. It also breaks down barriers viewers may feel about trying VR, as it’s less cumbersome and isolating. While users have to be strapped into tethered VR headsets, devices like Cardboard and Homido are designed like a window into a world. Hold them up, look in, and remove it. It allows for a more social experience, popping in and out of the headset. At Yulio we remove the straps from our higher-end headsets too so we can keep this sense of being able to remove the headset any time.

The 3 billion+ smartphones in the world also mean you can send VR experiences almost anywhere, along with a cheaper headset and your clients will be able to view them.   Additional costs for fully integrating mobile VR could include a pool of dedicated smartphones, so that incoming calls and messages don’t interrupt the experience. While this could add up quickly, there’s also an opportunity to buy some used phones for this purpose from classified ad websites.

At Yulio we’ve made our bets on mobile VR for its flexibility, portability and greater comfort of use and training...while still being able to immerse people in a totally new environment, quickly, easily, and wherever they are.

Whether it be used to deliver A&D portfolio presentations, ‘Try before you buy’ product demos, virtual property tours or to put potential donors directly ‘into’ an environment being highlighted by a non-profit, VR’s ability to engage people with emotional connection to an idea, an environment, a product or a cause is its real power. For more on integrating mobile VR into your workflow, check out our FREE 5-day email course and a recent article on sharing information through other media in VR, like audio, video, and text.