Sharing Information in VR with Audio, Video and Text

In the early days of television, it would be fair to say there was a ‘breaking in period’. It took broadcasters some time to get to grips with the new medium. In fairness, they and their listeners were used to news, information and entertainment primarily being delivered to their ears via a radio and therefore, with little appreciation for the context of a visual medium, the earliest shows consisted of little more than a camera being pointed at a radio presenter. Similarly, VR is the new and compelling game in town with the power to entertain, to communicate and to tell visual stories in an entirely different, multi-dimensional way. Creating strong content for this new medium inherently comes with the same challenges - how to effectively use all the various tools that VR offers in the right way and at the right time, to create the most engaging and immersive experiences possible while still giving users plenty of information. Long held design habits, honed through work within multiple different formats can be tough to shake and so, based on the findings from over a thousand hours of user testing we’ve carried out, we’ve put together a few things to consider that we think will help when trying to use text, audio and video in VR without interrupting the immersion.

Although, as we will touch on later, VR isn’t a visual only platform, it is visual-first. In the same way that filming a radio broadcaster doesn’t fulfill the potential of television or recording a Cirque Du Soleil show wouldn’t make for good radio, using more than minimal text with a VR experience is a distraction. Why would people want to read inside a VR experience? Beyond a few words within a menu or used as concise pointers for navigation, blocks of floating text can be disorienting and unnecessarily cover portions of a design. Not only that, the sensory conflict that can take place, when people view hovering text can cause feelings of nausea. While the desire to add a text-based commentary might understandably be to provide further detail on a specific product or to highlight a designer’s thought process, in the context of VR, there are better ways of providing a narrative which can add to an experience rather than detracting from it. Save text for good menu design, or to help users orient themselves within VR. Unity has some great examples of solid menu design, and many of them involve text that enters the space after a few seconds where the viewer can orient themselves without interruption, before seeing text in the context of what to do next, and which doesn’t block design elements

By contrast, this menu is incongruous with the surroundings and blocks the scene. 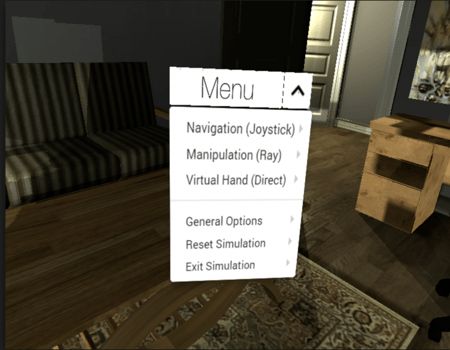 Offering short pieces of audio commentary at strategic points within a VR experience can be a great way to share key information in a non-distracting way. We’ve recently rolled out a new Audio Hotspots feature which allows designers to add audio files of up to two minutes to specific parts of their designs. For example, the below render of an exterior at nighttime was done by one of our partner studios and they've embedded audio to explain some of the design decisions, as well as add some ambient sound to the scene. You can view it here: https://www.yulio.com/Vi36c3a0FB 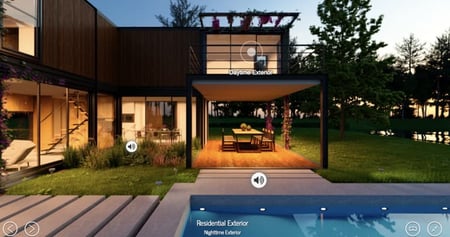 Triggered when a viewer gazes at the hotspot, these commentaries can be used to describe design choices, offer answers to questions, or provide information about products used in the design, all without interrupting the immersion of a VR experience. As an example of this in practice, an interior designer might choose to place a hotspot over an area a client had questions about on the last iteration, or where they requested changes, and call attention to exactly how they addressed their concerns. For those designers who typically present to a stakeholder who will later be sharing the design with other stakeholders, audio hotspots also let the designer maintain the control and consistency of the conversation. Beyond strategically placed commentaries, ambient background noise relevant to a visual is anecdotally believed to considerably increase the immersive quality of a VR experience. Whether it be the sound of kids playing when viewing the design of proposed new community development or office background noise within a new building design, audio is able to add an additional layer of reality into the experience.

Another way of creatively sharing information in a way that suits the immersive context of VR is through video. By adding video clips strategically within a design, triggered in the same ‘gaze-to-go’ technique as audio and navigation hotspots, creatives can offer viewers the ability to take a deeper dive into a specific element. Whether it be a retail application where viewers might gaze at a piece of furniture and view a short video clip of it being created in a workshop with specific details of the materials used, etc, or a real estate application where a new home buyer might gaze at a window in an, as yet, unbuilt home and launch a clip of the real-life surrounding area, when used creatively, video can add depth to a story being told in a way that perfectly fits the VR environment.

To find out more about Yulio’s new audio hotspots, available immediately to all Yulio Enterprise clients, visit our knowledge base.  Or to create your custom Enterprise plan, reach us at hello@yulio.com.