Sharing a Vision with Andrew Chung of Diamond Schmitt Architects

Since 1978, Diamond Schmitt Architects have been designing award-winning buildings across the world, consistently looking at sustainability in design and innovative new technologies to further user satisfaction and supply modern building operations. Recently, they've been working with VR architecture software solutions.

In a recent partnership with Ingenium, Canada’s Museums of Science and Innovation, they have designed an enormous adjacent building to the  Canada Science and Technology Museum in Ottawa called the Collection and Conservation Centre. The key problem they were solving was a way to house the Science and Technology collection in one building, with objects ranging in size from hand tools to actual trains. We sat down with Andrew Chung, (AC) an Architect at DSAI to discuss the Ottawa building and how VR architecture helped him communicate with his clients.

I’ll start by asking you to describe the architectural problem you were working to solve for Ingenium?

AC:  Ingenium’s existing museum facilities weren’t going to meet their future needs, and there was a need to renovate the existing Science and Technology Museum. In doing so, there was an opportunity to create a secondary building to the museum to house the collections for all 3 Science and Innovation museums. The collection is currently separated from the museums, spread across multiple warehouses.  We recognized the opportunity to join the collection into one building and give an opportunity to link the collection spaces to the exhibition spaces. Our building houses these amazing historical artifacts and major parts of Canadian scientific and engineering achievements, and offers the potential to preserve and maintain this important history into the future, and offer new generations better visibility to the richness of the Canadian achievements in science and technology throughout history.

So, what role did VR play in this project?

AC: The use of VR architecture fit very much into the architectural problem we were solving because we found out very quickly that the task of consolidating the museum collection from 3 scattered, separate spaces into one building created a unique architectural problem: the scale was hard to conceive. We’re talking about artifacts ranging from a wide range of sources; from the early agricultural hand tools,  the very first Bombardier Snowmobile, Canadian space probes, to the Governor General’s train, which itself is around 9m long. These items are really interesting aspects of Canadian history, and we really felt the need to house them properly and preserve them for the future. But because they are huge artifacts, the spaces had to be very large, and it quickly meant that the building couldn’t be person scale, and instead had to be tailored much larger. The collection exponentially increased the size of the building quickly. When you’re designing objects of this size, it drastically changes how you approach the design problem. And so to really understand the scale, we introduced VR architecture scenes to the project. We needed to see how big these items were for our own understanding. And then when we saw that we could get really detailed images from Yulio, it helped us propose design solutions to the client. It allowed us to talk about things in a perspectival manner that captures scale in a much better way than solely using a 2D drawing. People who see our 2D drawings or blueprints still don’t really comprehend the scale until they view the VR architecture design experience. We were trying to find solutions to help communicate that spatial understanding to the client, and VR came into play for that.

DSAI ‘dollhouse’ view of the building

And in Yulio VR with linked hotspot scenes

Had DSAI worked with VR before?

AC: DSAI was using smaller VR architecture experiences of one scene or a perspective in a performing arts center from one vantage point. What Yulio let us do was create multiple scenes and spatial cohesion by stringing together multiple scenes with hotspots. That way, someone not used to looking at our plans can understand and orient themselves much more clearly. That’s when we were able to much more efficiently communicate just how big this building would be, and how everything would coalesce together. It helped clients understand why spaces had to be designed so large, and understand how we were able to solve the organization of this massive collection, to fulfill the goal of preserving this Canadian history. This is why working on this project has been a great pleasure, as it presents many unique design and communication challenges, among which we’re solving with products like Yulio.

Why did you decide to go with a mobile VR solution?

AC: We know VR architecture design  is currently a hot trend, but when we were looking at available platforms, the ‘high end’ VR experience required a powerful computer and tethered experience. In addition,  you had to have the client present in our office in person, which presented a challenge as the client is located in Ottawa while we were in Toronto. The high-end approach to VR  meant that overall, the communication reach would be pretty low. Mobile VR worked better for us because it gave us the opportunity to communicate through everyday, accessible objects like smartphones. For our design and review process, we would simply send a web link through Yulio, and we were able to share the content with our client easily. The aspect of communicating effectively at a  distance as very important,  and we were able to send things quickly and update the content seamlessly, much like a web platform. Yulio became like a content management system for us.

How did your client respond to the VR experience?

AC:  That’s actually a funny story. Originally, the VR portion was actually a side project. We are of course focused on the best, most workable design first. But VR was an opportunity to explain the space better, to really get a much deeper client comprehension. Before VR, the client understood the concept but didn’t feel the visceral connection. We noticed a much more emotional response once they viewed our design in VR, in contrast to an almost clinical approach when they looked at plans. So once they had that emotional connection to the space, they bought into more of our ideas around space planning later in the project. The client’s understanding of our design just grew exponentially after exposure to VR. 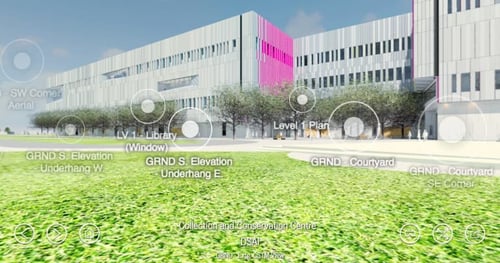 And how did that VR engagement change the project going forward?

AC: Our engagement with our client grew exponentially when we introduced VR. Now they’re getting into what we’ve proposed and are much more excited. We have found the client has engaged in a dialogue with us much more frequently. It’s not just a relationship of us describing the project to our clients, but also seeing how they’ve shared more of this material with their staff. As an example, the client asked us to add views of conservation labs so they could share their conservationist staff. The plan would show a series of rooms, which graphically would show up as boxes in these labs, but in VR they could see how tall the units are and how the spaces were stacked. It’s a greater level of excitement at many levels of the organization.

Did working in VR change your process as well?

AC:  We actually started using VR as an internal design tool, and it has been a fantastic tool amongst our team. Since we were working with multiple designs iterations in Revit, connecting everyone on the same level was extremely important. Throwing our design into VR would quickly reveal tasks and revisions we needed to accomplish and figure it out much more quickly in the design process. It gave us better opportunities to figure out solutions to the design problems earlier on. You would get more time to play creatively and explore solutions because fundamentally, you would get to the core of the design focus earlier as a result of this added understanding and resolution. Since the depth of exploration goes further, and our design gets better because we’re able to visualize problems earlier than waiting for issues to arise.

How do you envision using Yulio on future projects?

AC: Our design process has changed for the better with VR. From our staff who have a drafting history to those who think in 3D programs, everyone is excited by the sense of scale they can see in VR. It’s generating a lot of excitement within the firm because people get to see their vision sooner. It’s changing the way we talk about things too - in internal meetings, we’ll pull up the Yulio VRE and solve a detail or design challenge and it creates better understanding among the design teams. In the future with our clients, I see VR as part of a robust feedback loop, going beyond the show and tell to getting client feedback in context, and build two-way communication in VR to increase collaboration between the team and our clients.

AC:  We’ve had a great dialogue with Yulio around VR architecture practices. While we’ve had a two party relationship with our client, we’ve found it has become more of a three-party relationship with the Yulio on a technology level. This whole process has proven that our feedback can help with design - whether it’s our design or the Yulio platform. So it’s not one way at all, it’s a dialogue that creates three happy parties with us, our client and the Yulio team. The building project itself is moving quickly, the first floor is being poured right now, and we’re interested to see how well the VR design that showed the intent of the building aligns with the completed building. Did we predict things accurately? VR lets us see into the future, and when construction is done we’ll see how close we were.

Our thanks to Andrew Chung of DSAI for sharing their success in deepening client engagement through VR. For more information about creating your own VR designs, sign up here to schedule a training webinar with a full walkthrough of Yulio.