VR Interior Design Software for the Next Generation of Designers

A conversation with Jonathon Anderson, Assistant Professor Interior Design, Ryerson University
For over a year, Yulio has been working with senior faculty members at Toronto’s Ryerson University to bring VR interior design software to the curriculum. In 2016, the Yulio VR platform was introduced to all students within Ryerson’s Architectural program - a story widely covered in the Canadian media - and a few months later, was also successfully integrated into the University’s Interior Design program, led by its Assistant Professor of Interior Design, Jonathon Anderson (JA). With the Interior Design students having completed their first semester with VR as a component, we sat down with Jonathon to hear what the response had been to using VR interior design software in the classroom and where he saw VR within the future of his industry. 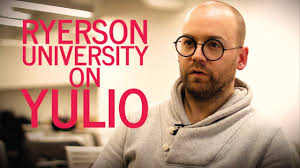 Thanks for talking with us Jonathon. Could you start by giving us a quick overview of exactly how VR interior design software is being used in the classroom?

JA - VR was a natural fit for our curriculum and was introduced to our second-year students that had working knowledge of 3D modeling.  The Yulio technology integrates easily with the 3D modeling tool, such as Rhino and Vray, that I already use and teach my students. It was a perfect marriage and allowed students to use the same design technology they were familiar with and easily transfer the models that they were creating into VR. By using VRAY to create a still rendering and using that same camera to produce the virtual reality experience (VRE) students were able to understand the power of looking at a 2D image in front of them and then, through turning it into a VRE, be able to appreciate the entire space in a way that’s far more closely aligned with how people really experience spaces. With this being the first year the students were introduced to VR, many are still pressing the button once at the end of a design to turn their work into a VRE and experience it that way. A portion of the students are starting to go beyond this - which is what I’d really like them to do. They are building a design, using Yulio to generate the VRE, experiencing the design in virtual reality and then going back to the computer to modify or refine their design based on that improved spatial understanding VR interior design software gives them.

How did you come to the decision that VR wasn’t a fad but was something that would impact A&D in a significant way in both the short and long-term?

JA - I think VR and AR is the way of the future within A&D. I don’t see this as a fad that’s going to disappear anytime soon. The technology has become far more accessible and VR is something every firm can now have as part of their toolkit, without the need to hire any kind of specialist. This is especially true when platforms like Yulio have completely removed the technical complexity and made it solely about delivering the best possible user experience for designer and viewer, I think that it will soon become ‘the new normal’ in A&D. With VR, I see my students immediately ‘get’ the space. What I mean by that is that they understand scale and proportion in a completely different way through the VR experience when comparing it to the spaces they view on a screen. It allows my students to understand space far better and far more quickly. Students don’t naturally understand how to design for those who would eventually build something. With the spatial awareness that comes with seeing designs in VR, they are far better equipped to design with contractors in mind.

Was there anything about the use of VR in the classroom that was unexpected?

JA - I didn’t expect the students to be so in awe of the experience and that was exciting to see. My students have grown up with access to incredible technology within their own lives and certainly within the university. It’s everywhere they turn and they’ve known nothing else.  It was, therefore, amazing to see them so wowed by VR. It’s hard to keep 100 students excited but I saw VR do that. I think as more of our students are exposed to the technology over the coming year, I see it becoming the natural way that the students will design and present their work.

Where do you see VR’s place in the future of interior design?

JA - I think on a very fundamental level VR will change the way that clients or potential buyers make decisions. I think developers will use it as a sales tool and be able to demonstrate to clients a full palette of different interior finishes. The role of the interior designer will change in line with that. Rather than working with each individual client, they will be responsible for providing a catalog of options that they know will look good and work well together and that will be what is pushed into the VR experience for clients to choose from. By being able to show clients options before anything is real and have them choose their exact preference means they are then able to walk into the finished property and have it be exactly what they were expecting.

Do you believe VR will be a critical skill for new designers to have?

JA - Yes. I believe understanding and using VR interior design software will have to be a critical element of design training for careers in A&D. Several of my students are already changing the presentation of their portfolio from the physical walking through of drawings that are typically expected in the architecture and design field. They have gone into internship interviews with only their cell phone and a pair of VR glasses and asked potential employers to view their work in virtual reality. Notably, by doing this, they secured the placements they wanted and I think this is due to the fact that they set themselves apart from the hundreds of other candidates. They believed this could change something for them and it was relatively easy. They already had the 3D models and the VRAY renderings. All they had to do is click a button and they had everything they needed to be stored right there on their cell phone.

So much of what interior designers do is about connection and human experience. It is about creating living environments and there’s no other technology that can offer people a spatial experience or communicate living environments before they’re real, better than VR. Our thanks to Jonathon for sharing his insight to into the next generation of VR designers with us. Try creating your own VR experiences, or your own portfolio for free with Yulio.