A few days ago, we said our farewells to 2018, and now get ready to brace ourselves for what’s to come in 2019. 2018 proved to be an exciting year for the VR, with the industry conquering the limitation of being a tethered experience. However, we believe that 2019 will be an unforgettable year for VR.

At this time of year, industry experts are sharing their thoughts and predictions on what we can expect for the new year. We have asked Ian Hall, Yulio’s Cheif Production Officer and Co-founder of Pixel Tours Inc., for his predictions for VR in 2019.

“One of the biggest releases to look out for in 2019 is the Oculus Quest. The Quest is like its predecessor the Rift but it will be in mobile form, and this is going to be huge. We will be heading into an era where VR is becoming even more advanced and sophisticated than ever before, and all of it will be available to the public. Technology that was once $3000-4000 will now be $300-400, thus allowing everyone and anyone to be able to use it.”
- Ian Hall, CPO of Yulio & Co-founder of Pixel Tours Inc. 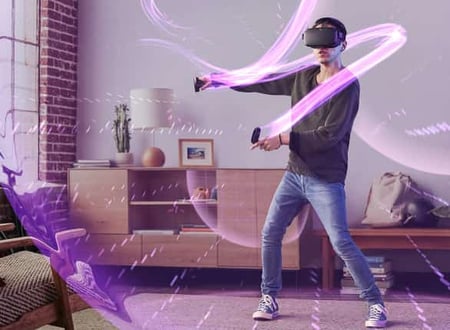 Get excited for Oculus's brand new launch in Spring of 2019!

Let’s dive a little deeper into what we can expect from VR in 2019.

The Quest comes with two handheld controllers that are tracked by cameras along the outside of the headset. This tracking system is called Insight and allows the Quest to read six fields of motion without the use of external sensors or wires. With the technology being wireless, and the addition of Insight, the Quest has a greater ability to allow the handheld controllers to mimic the motion of your hands more seamlessly. As such, Oculus has unlocked another stage of even greater and immersive experience than ever before. With the ability to have more freedom and mobility to use the Quest wherever this new release is as easy as pick it up and go.


Jesse Schell, CEO of Schell Games, predicts that the Quest will be incredibly popular and see groundbreaking growth in this new year.

“The Oculus Quest will sell at least one million units by the end of 2019, proving out the market for wireless 6DoF all-in-one VR systems. It will be one of the hottest items for holiday 2019.”
- Jesse Schell, CEO of Schell Games


Putting the ‘Real’ in Virtual Reality

Another aspect that Ian touched on was how VR will become even more advanced and sophisticated. With those in the industry constantly making the VR experience more immersive than ever before, 2019 will welcome more advancements in this area. Vaibhav Shah, CEO of Techuz, adds as well that there is great immersive content out there, however, advancements in the User Interfaces we use is needed. Currently, many “games and websites have the same kind of UI that we interact through the screen”, shattering the illusion of VR. Being reminded that you’re in a VR realm completely misses the point of the technology.

However, 2019 is promising changes that will drastically improve VR. We can anticipate in this new year a more smooth and seamless experience where we won’t be reminded we are in a virtual world.

In the past, VR headsets could dig a hole in your bank account. When the Oculus Rift was first released, the headset itself cost $599. That price is also based on the assumption that the customer’s PC met the minimum hardware requirements to use the tech. Being able to afford the computer and the headset could cost $1,200 or more. Now, VR headsets are more affordable than ever, especially with the most recent release of the Oculus Go. Prices now start at $269 for a 32GB Oculus Go headset, allowing everyone to be included in all the VR fun. The Oculus Quest is projected to cost around $399 due to quality and how technologically advanced it is. Gone are the days where headsets could cost a person from $1,200-4,000 per headset. We now welcome an era where everyone can enjoy VR at a reasonable price.

2019 looks to be an awesome year for VR, with new releases, and upgrades that will bring this tech to a whole new level. We hope you all are just as excited as we are for virtual reality in 2019!

Here at Yulio, we strive for excellence in performance and integrity when it comes to our product, and customer service. To learn more about what VR is, how it can enhance your business workflow, sign up for our FREE 5-day email course.  To try our program for yourself, sign up for our free 30-day trial (no strings attached).